Imagery from Landsat 9 can now be explored on EarthImages

PRODUCT UPDATE
Are you interested in non-commercial data sources? Imagery from the newest satellite in the U.S. Geological Survey (USGS) Landsat fleet - Landsat 9 satellite is now open and available via our EarthImages platform!

Landsat 9 is a joint mission between NASA and the USGS that was launched on 27th September 2021, joining Landsat 8 in orbit. The first collection of images was made on 31st October with the full archive being made available with over 57,000 images collected so far. The aim of the mission is to help people manage natural resources and understand climate change. Landsat 9 will gather an additional 750 images each day, which will be accessible to the public within hours of acquisition.
Contact us to learn more about Landsat 9 and other non-commercial data and commercial imagery products and get your personalized offer.
Image: Natural color image of Eleuthera Island, the Bahamas, as seen by Landsat 9 on January 18, 2022. Between Landsat 8 and Landsat 9, the Landsat program delivers complete coverage of the Earth’s surface every eight days. Source/usage: public domain
CONTACT OUR EXPERTS
The release of Landsat 9 imagery stands as a major milestone for the Landsat Program, which began 50 years ago with the launch of Landsat 1, then known as the Earth Resources and Technology Satellite (ERTS). Since 2008, the USGS Landsat Archive has provided more than 100 million images to data users around the world, free of charge. The program’s unique long-term data record provides the basis for a critical understanding of environmental and climate changes occurring in the United States and around the world.

Landsat 9, the first mission under the multi-decadal USGS-NASA Sustainable Land Imaging (SLI) partnership, was launched from Vandenberg Space Force Base on September 27, 2021. It became operational after its successful post-launch assessment review, marking the beginning of the satellite’s mission to extend Landsat's unparalleled, 50-year record of imaging the Earth. The satellite’s Operational Land Imager 2 (OLI-2) captures observations of the Earth’s surface in visible, near-infrared, and shortwave-infrared bands, while its Thermal Infrared Sensor 2 (TIRS-2) measures the thermal infrared radiation, or heat, emitted from the Earth’s surface.
Landsat 9 detects more subtle differences than its predecessor, especially over darker areas such as water or dense forests. With this improved radiometric resolution, Landsat 9’s OLI-2 can differentiate 16,384 shades of a given wavelength. In comparison, Landsat 8 provides 4,096 shades. Landsat 9 takes the place of Landsat 7, which only has 256 shades. TIRS-2, meanwhile, has significantly reduced stray light, enabling improved atmospheric correction for more accurate surface temperature measurements. 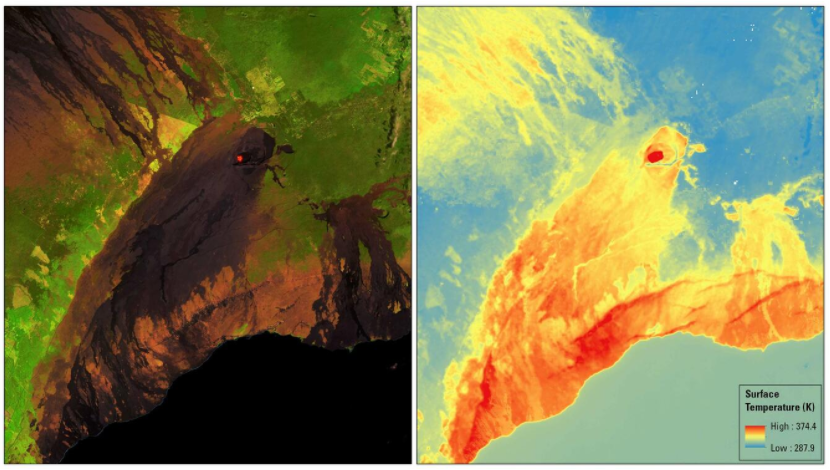 Images: Hawaii’s Kilauea Volcano, captured on January 25, 2022. These images show two of the USGS science products built from imagery collected by the Landsat 9 satellite. The left image shows Landsat surface reflectance, a product that removes atmospheric interference to best mirror on-the-ground conditions, as recorded here in the short-wave infrared, near infrared and red bands of the electromagnetic spectrum. On the right is the same image seen through the lens of the Landsat surface temperature product, which records temperature in Kelvin. Source/usage: public domain
All commissioning and calibration activities show Landsat 9 performing just as well, if not better, than Landsat 8. In addition to routine calibration methods, an underfly of Landsat 9 with Landsat 8 in mid-November 2021 provided cross-calibration between the two satellites’ onboard instruments, ensuring data consistency across the Landsat Collection 2 archive.

Visit our image gallery to view Landsat 9 samples and learn explore specification of the Landsat series. Access Landsat 9 images free of charge through https://imagery.geocento.com/.
Reference:
Imagery from the newest satellite in the USGS Landsat fleet is now open and available to the world – USGS
© 2022. Geocento. All rights reserved